skip to main | skip to sidebar

How I got into the "bizz"

I got started with this Audio Post Production stuff almost two decades ago - back before digital audio and video had become possible. I had worked as a cinematographer prior to that, and for several years headed up a commercial production company with a producer partner. This is a whole 'nother' story, but when that company went south, (funny story) my partner took the computer and I was left with the offline editing machine and the office! I rented out the off line editing suite to folks who would eventually conform to 1" video tape. When they finished the online they would inevitably complain the the mix "was awful". Here I saw an opening. I figured out a way to slave audio tape machines to a video master and viola, I could control the quality of the mix!

I was a late comer to the digital revolution which in our business really began with audio since it is so less data intensive than video. I remember once when some film students from NYU were in my studio to observe what a Voice Over session is like. It was for a radio commercial of some sort, and when it came time to put the buy takes together, I would physically splice out the take and drape it around my neck before putting it into the right place. I had thought that this was pretty cool and was proud to have demonstrated my skills. When the students were on their way out, one of them took me aside and said, "Mr. Markle, there has got to be a better way to do this!"

This one comment pushed me over the edge, and before long I was knee deep into the digital revolution - sampling platform after platform before settling what has become the industry standard - Pro Tools.
Posted by bill at 4:53 PM 1 comment: 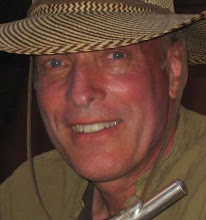